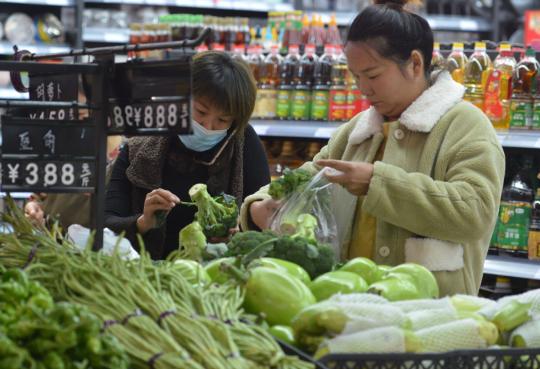 Consumption is gaining traction and injecting impetus into China's economic recovery, as the country's retail sales grew by 0.9 percent on a yearly basis in the third quarter, the first positive quarterly growth this year.

Total retail sales of consumer goods reached 3.53 trillion yuan ($526.7 billion) in September, up 3.3 percent on a yearly basis, 2.8 percentage points higher than the level in August, maintaining the growth momentum for two consecutive months, the National Bureau of Statistics said on Monday.

During the first three quarters, the indicator went down by 7.2 percent on a yearly basis to 27.33 trillion yuan, with the decline narrowing by 4.2 percentage points compared with that of the first half of the year.

It is noteworthy that online retail sales rose by 9.7 percent on a yearly basis in the first nine months, 2.4 percentage points higher than that in the first half of this year, the NBS said.

Specifically, the online retail sales of physical goods reached 6.65 billion yuan during the January-September period, climbing by 15.3 percent on a yearly basis, accounting for 24.3 percent of the total retail sales of consumer goods.

Consumption is playing a vital role in shoring up the economy that was hit hard by the novel coronavirus outbreak, said Wang Qiang, an associate professor of the Business School at the Renmin University of China.

Wang said that online shopping has provided strong support for China's consumption growth and ensured people's livelihood amid the pandemic, while estimating that retail sales are expected to maintain growth momentum in the fourth quarter.

Liu Aihua, a spokeswoman for the NBS, said that China's retail industry has stepped out of the dark shadow of the pandemic and is demonstrating a recovery. She said that online purchases are seeing rapid growth, while offline consumption is also recovering as more consumers are willing to purchase at brick-and-mortar stores.

Recovery has also been seen in spending on services, including catering and accommodation, along with a rebound in cosmetics, jewelry and car sales, she said.

According to the NBS, sales of upgraded consumer goods grew fast, with the retail sales of telecommunication equipment, sports and recreational articles rising by 7.2 percent and 6.8 percent respectively in the first three quarters.

Mo Daiqing, a senior analyst at the Internet Economy Institute, a domestic consultancy, emphasized the importance of the online retail segment in sustaining and boosting consumption, thus helping enhance the resilience of the real economy.

"More consumers are keen on online purchases since the COVID-19 outbreak, and their pent-up consumption demand will be gradually released as the pandemic is increasingly brought under better control in China," Mo said.

Consumption will become the main contributor of GDP growth in the fourth quarter of this year, overtaking both manufacturing and investment, said a recent research note from UBS Global Wealth Management, a Swiss investment firm.