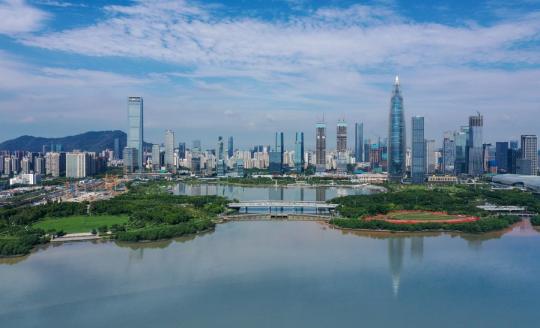 China on Sunday announced a new list of the first batch of authorized matters for comprehensive pilot reforms in Shenzhen, as part of its ongoing efforts to facilitate higher-level reforms and opening-up in the high-tech hub adjacent to Hong Kong.

The list outlined 40 detailed reform measures to be implemented in Shenzhen, such as promoting the reform of the registration-based IPO system in the city's startup board ChiNext, the introduction of a listing transfer mechanism from the country's over-the-counter equity market to ChiNext and piloting domestic issuance of stocks or China Depository Receipts by innovative companies.

The announcement came after President Xi Jinping attended a gathering on Wednesday to celebrate the 40th anniversary of the establishment of the Shenzhen Special Economic Zone, where he called on the city to build itself into a pilot zone for socialism with Chinese characteristics.

Ning Jizhe, vice-minister of the National Development and Reform Commission, said the new list, together with the newly implemented plan for comprehensive pilot reforms in Shenzhen, will unleash huge benefits enabled by reforms for its high-quality development.

"Under the overall framework of the new plan, the list has outlined 40 targeted reform measures, of which more than 20 require adjusting existing laws and regulations," Ning said at a news conference on Sunday.

Dong Dengxin, director of Wuhan University of Science and Technology's Finance and Securities Institute, said the pilot reform highlighted the acceleration of China's capital market reform and further integration of the market with international practices.

"The capital market reform in Shenzhen has taken bolder steps, which will help regulators and market players to gain useful experience and will help improve the fundamental system and efficiency of China's overall capital market," he said.

He said that the reform measures, such as the introduction of stock index futures of Shenzhen-listed shares, will help enrich the financial derivative products in the market and boost the attraction of the Shenzhen market to both domestic and international investors.

The establishment of a listing transfer mechanism from China's over-the-counter equity market to ChiNext will also help the country's smaller innovative firms gain easier access to capital and boost their attractiveness to investors. And the introduction of the listing of Chinese Depository Receipts on the Shenzhen Stock Market will also help facilitate the return of overseas-listed Chinese companies to the A-share market, Dong added.

According to the new list, more efforts will be made to support the construction of a big data center in the Guangdong-Hong Kong-Macao Greater Bay Area, pilot China's first personal bankruptcy system in Shenzhen and grant greater autonomy to the city to pilot in fields including artificial intelligence, autonomous driving, healthcare and information services.

Other measures include promoting the establishment of technology transfer departments in universities and scientific research institutions, authorizing Shenzhen to independently issue local government bonds and expanding opening-up in ports and shipping sectors.

Wang Changlin, president of the NDRC's Academy of Macroeconomic Research, spoke highly of the bolder reforms to be implemented in Shenzhen, especially in the market-based allocation of factors of production, business environment optimization and opening-up.

"With the support of preferential policies, Shenzhen will not only foster high-quality development, but will also play a key role in boosting the development of the Greater Bay Area and even the whole nation," he said.

Wang Yiming, former deputy director of the Development Research Center of the State Council, said the new moves demonstrated China's firm determination to open wider to the outside world.

Shenzhen, the home of Chinese tech giants such as Huawei and Tencent, has been playing a significant role in powering China's economic transformation and technological innovation.

According to the Ministry of Science and Technology, the added value of the high-tech industry in Shenzhen reached more than 920 billion yuan in 2019, accounting for over 34 percent of the city's GDP.

Alibaba to take control of top hypermarket for $3.6 bln